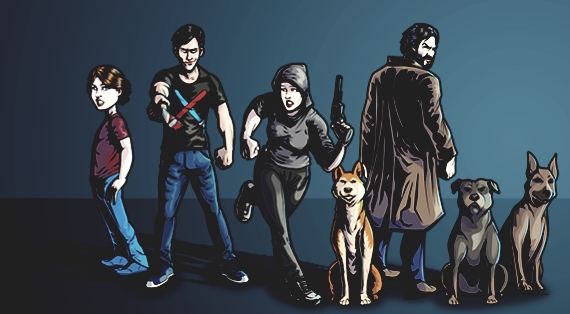 Survivors of the Z’s – Teddy Baker, Bromley, outside Wales

I just had to do it
I just…
Had too
I didn’t let my dark side take over and leave them behind. I just shook myself out of it and let myself think enough to know what I was about to do was wrong
Or was it wrong?
Or was it right?
Was it right to risk my children’s lives by waiting that extra more to help people in need?
Was it right to even think about helping them in the first place?
I was on a path that ended and the only ways to go were either left or right. I chose the right turn which led to floods of water that was already deep. I just had to hope that it wouldn’t begin to mix with the colour red.
“Hurry!” Elijah begged
Not many steps to go now. I felt the old man’s hatred against me as I helped. Touching him. Touching the man I just tried to kill and now I was helping him. A feeling I could’nt quite grasp. A feeling that was either up or down.
The door
Was in reach
JUST. A FEW. MORE. STEPS.
I reached out my arm to help us up the steps to the door and heard the bellows from their infected souls tear at my ears. Every second felt like a game of chance. A game where you rolled the dice and it had to be the highest number possible. The old man winced In pain with every step.
Then finally
The last step was took and we could get inside.
“Close the door!”
Old man Frank was taken by Margeret and he slowly fell to the ground with her aiding him. Jack slammed the door and the door banged heavily into him. They were at the door, but only a few.  A gut feeling then told me it wouldn’t be long until the area would be in tatters. A place where nothing but blood and rotted skin would live to tell the tail of the nightmare that occurred that day.
What once was the perfect place to live.
Nice houses
Nice life
Nice people
Out of the way.
Was now catching up with the rest of us. A soon- to- be- ruin and for who ever survived
Mentally and
Physically
Would come out different in the dawn of this grotesque new planet of ours. Nobody was going to be sane after this…
NOBODY
I looked out of the window and I could see that they had scattered and the other houses were now going to have unexpected guests.
Another bang at the door and the others jumped, “who knew it would end like this,” said Margaret
Margaret held Frank in her arms on the ground. She looked up at the sky like somebody was going to help her.
Give her strength
HOPE
She then noticed me looking at her and the look she gave me back was of disgust
Of loathing
I turned to Elijah who stared at the door like he was waiting for his curtain to raise and behind that curtain would be a crowd of figures in black hooded cloaks.
I turned to my kids and realised what I had to do. My body changed into something else. Into my other self. If it came to the worst I would fight the fuckers.
“Elijah, wake up!” I told
I needed him. I needed his big body and the force of it to aid me.
“Frank, talk to me Frank please, Frank!”
For what I gathered the old man had bled out
Passed on
Margaret sobbed and her grand cheeks were flooded and the wrinkles were turned into rivers.
Suddenly
In what probably felt like a click of the thumb
Their world was torn apart
“You can’t die, you can’t leave me, Frank!”
I grabbed Jack and Lianne, “Elijah!” I shouted, “lets go”
“We can’t leave her here!”
“We have no damn choice, you either come or you don’t, I’m going!”
“She’s helpless, she can’t survive!”
“Then it’s best if she doesn’t!”
The windows smashed. They were in and Elijah finally made up his mind. Four of them exploded through the window and roared straight toward us.
Their clothes
Torn to bits
Their skin…
Shredded
The only look I got of them was of the final look of the room Margaret and a deceased Frank sat in.
She screamed whilst she hugged her dead husband tight, “Ahhhhh!”
We had already gone. Out of one door which led down a coridoor full with family photos what must’ve been their grandchildren and children and maybe great grandchildren. The coridoor was long and the door looked too far where
That one second counted.
But seconds were dying fast in the long coridoor.
“Wait wait,” I said
I looked out of the door which led to the large backgarden. A big Green house sat in the corner of it and a large shed sat on the other side. Flowers were neatly placed and the grass was perfectly cut. It was a beautiful garden. Nothing was there, so it was safe to go. The things I could hear were the distressing voices echoing in the chaos.
“Lets go,” I said
We scurried out of the door. The screams followed us across the greenery and toward the back gate. With my children by my side and Elijah behind us. We left the screams behind
We hoped